Challenges:
Design a fire station on a rural site establishing a symbolic and functional presence for the City of Huntsville on property recently annexed into the city limits, allowing for future industrial and residential growth.

Solutions:
The structure is a simple box form with the street front dressed in an arrangement of metal and brick planes that express the three primary components of the fire station: truck bays, dayroom and dormitory.

Fire Station 18 is located in an agro-industrial area of rural Limestone County, Alabama, between Decatur and Huntsville. The materials and forms recall surrounding industrial buildings, while at the same time imparting a sense of civic character that distinguishes Fire Station 18 as a public building. The structure is a simple box form with the street front dressed in an arrangement of metal and brick planes that express the three primary components of the fire station: truck bays, dayroom, and dormitory.
Metal siding runs horizontally to complement the agricultural landscape. Utility brick, combined with spare use of limestone for window headers and sills distinguishes the fire station from the strictly utilitarian structures in the immediate vicinity. The interior spaces are arranged to optimize quick access to the truck bay to keep response time to a minimum. Recognizing the changing demographics of the firefighter corps, the design team proposed individual sleeping rooms, supported by private-use bathrooms, to accommodate flexible and unpredictable male / female staffing needs.
Conversely, the central common spaces are designed to encourage interaction and teamwork among the entire crew. The dayroom takes advantage of the tall volume required by the truck bay to create a lofty space capped by an oversized ceiling fan. An implied tower, topped by a 5’x5’ limestone panel engraved with the number 18, serves as a striking visual counterpoint when viewed against adjacent fields of cotton, corn, and soybeans. The limestone panel is lighted to create a nighttime beacon in the landscape.
Fire Station 6 was designed after Fire Station 18 in a similar layout, to create continuity between the new Fire Department facilities. 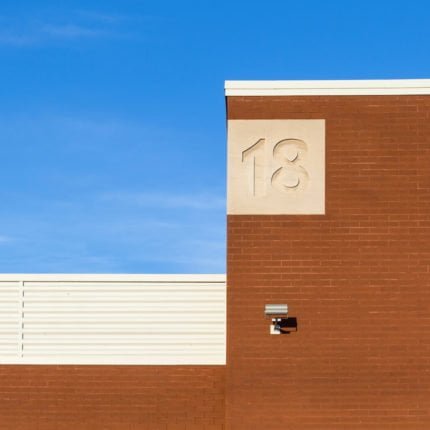 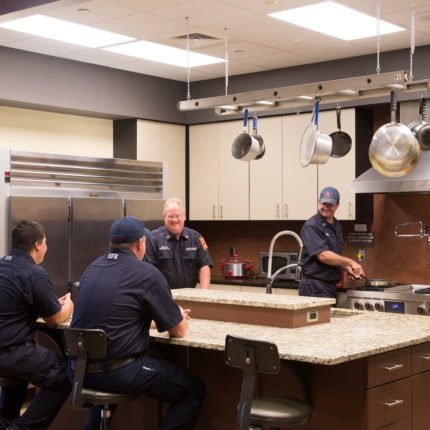 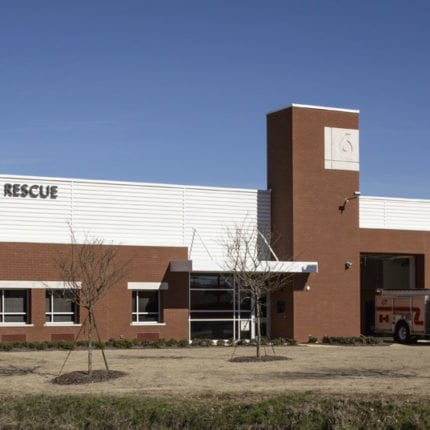